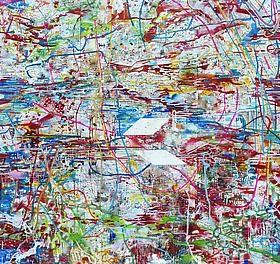 
PATRICK MIKHAIL GALLERY is pleased to announce AMY SCHISSEL has been selected a semi-finalist in the 2011 RBC Canadian Painting Competition. The results were announced today by the Canadian Art Foundation and the Royal Bank of Canada.

The competition awards one national winner with a prize of $25,000 and two honourable mentions, who each receive $15,000. Winners will be announced in Edmonton on September 27. With a total of $55,000 in prizes, the RBC Canadian Painting Competition offers one of the highest awards of any painting competition in Canada.

“The RBC Canadian Painting Competition provides up-and-coming artists with an opportunity to be recognized on a national stage and showcase their work,” said Ann Webb, executive director, Canadian Art Foundation. “This year’s submissions are a remarkable representation of the talented visual artists that we have in this country. Selecting these 15 semifinalists was incredibly difficult, and the jury will find it even more challenging to name a winner this fall.”

“For more than a decade, the RBC Canadian Painting Competition has helped discover promising new artists and provide them with valuable national recognition and financial support at the early stages of their careers,” said Robin Anthony, curator, RBC. “We are proud to recognize and congratulate these high-calibre artists for making the shortlist this year.”

Submissions were accepted from professional and practicing Canadian visual artists who are in the first five years of their careers. The RBC Canadian Painting Competition was judged by some of the most respected artists, gallery directors and curators in Canada. A complete list of jurors can be found at www.rbc.com/newsroom/2011/0407-cdn-painting.html.

All regional jurors will come together in Edmonton in late September to determine one national winner and two honourable mentions. On September 27, the 2011 winner will be announced and all 15 paintings will be on exhibit at the Art Gallery of Alberta from September 24 to October 10, 2011. The exhibit will also stop at the Art Gallery of Hamilton from October 19 to November 3, and at the Power Plant in Toronto from November 12 to 19. Admission is free. All finalists will be featured online at www.rbc.com/paintingcompetition.

About the RBC Canadian Painting Competition
Established in 1999, the RBC Canadian Painting Competition is a tribute to Canada’s artistic talent. The goal of the competition is to support and nurture emerging Canadian visual artists by providing them with a forum to display their artistic talent to the country and hopefully open doors to future opportunity. An investment in Canadian culture and the visual arts community, the competition will award one national prize of $25,000 and two honourable mentions will receive $15,000 each. Along with past winners, the winning paintings of 2011 will become part of RBC’s Canadian art collection comprised of more than 4,000 works of distinguished art collected over the past hundred years. Various paintings from the RBC collection have been exhibited in museums, enabling more Canadians to enjoy these wonderful works. Details and rules of the competition may be found at www.rbc.com/paintingcompetition.